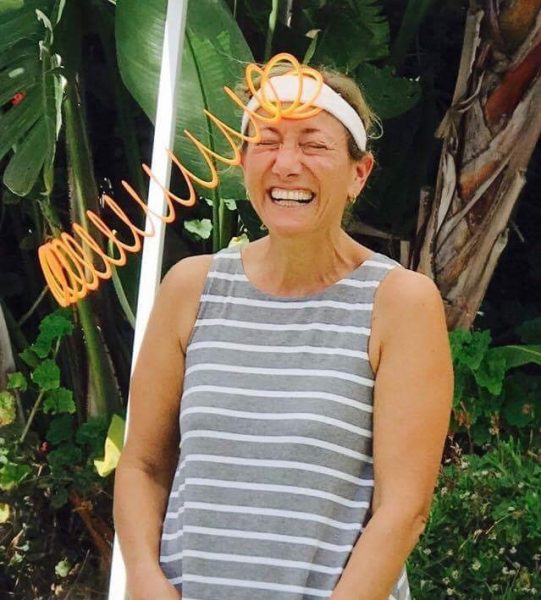 The following is an excerpt from Dune’s latest book,

The Timing of Chicken Feathers, available now on Amazon.

“If you have twenty four odds and ends on a table, and twenty three of them fall off, what do you have left—an odd or an end?”

Yes, I know that mine are all odd jobs, but some of them are a little odder than others.

I was once hired to provide six monks for a corporate event that was being held at The Mission in San Juan Capistrano.  This was our job; we stood silently, costumed in brown habits (with hoods), lining the walkway from the bus into the party.  There were Gregorian chants playing in the background.

That was it.  But it was awesome.  It created a monastic atmosphere as the guests entered the party.  They had a beautiful dinner, dancing, and Martin Mull was the headliner.  After the guests entered, the six of us went to the ‘green’ room to wait till the party was over.  We wound up eating and playing poker for about three hours, and I snuck out to listen to as much as I could of Mr. Mull’s comedy set.  Then, we donned our robes and went back out to the walkway to stand silently while the guests left.  The look of the six of us standing completely still, with the chanting in the background was perfect.

It’s about an hour drive from San Diego to Capistrano.  All I could think of throughout the whole drive there, during the gig, and on the drive home was; “Hey, Hey, We’re the Monkeys.”

Sometimes, it’s not the job that’s odd; it’s what happens at the job that makes it interesting.  I (Dooney) was working a nighttime sixteenth birthday party, making balloons for all the young adults.  This was at an exclusive home in a wealthy part of town, and I’d worked for this family a few times by then.  It was a normal night of balloon hats and magic, and I was standing in the middle of the main snack area, making one of the guests some kind of balloon.  Suddenly one of the girls walked straight through the sliding glass door and into my arms.  There was a tremendous crash, glass flying everywhere, and I found myself standing right in front of a scared teenager with multiple cuts on her face and arms.

I immediately grabbed her and helped her down to the ground.  I pulled stacks of napkins off of the table, and started applying pressure to the most severe cuts on her forehead.  “Go get Margie” (the mom), I firmly stated to one of the other guests; while I continued to reassure the injured girl that it was going to be alright.  Luckily, the next door neighbor was a doctor, and in less than five minutes he was there, and I was able to hand her off to very capable hands.  You never know what you’re going to be asked to do, but being helpful is certainly part of a clown’s job description.

I was working a street fair in Bellingham Washington just making balloons at a street corner for tips.  This was early in my career, when I didn’t have any jobs booked that day.  The nice thing about what I do is that I can find a group of people just about anywhere, and start making money.  I had a pretty good line, and was making good money, when I was approached by four very hairy young guys who asked if I could move over a little, so that they could do a juggling show there.

I didn’t have to move, in the busking business, it’s first come first served.  I chose to move over, because it’s usually beneficial to work right next to a show, or anything that slows people down and helps them to have fun.  I enjoyed their show, and it wasn’t till years later, when they opened their Broadway show, that I realized who I had shared a street corner with.

THE CAT IN THE HAT

I was working a New Year’s Eve party on the top of a beautiful hotel in downtown San Diego in about 1986.  Of course, I was making balloon hats for everyone when I was approached by Theodor Geisel (Dr. Seuss himself).  I recognized him immediately, and he was very intent on talking to me about making a balloon Cat-in-the-Hat.  At that time, there were no multiple colored balloon sculptures like there are now, and he wasn’t happy when I told him that I couldn’t do it.  He tried to describe ‘the Cat’ to me, and I told him that I knew what he looked like, I just couldn’t do it.  Finally, Mr. Geisel pulled out a napkin and drew me a picture of The Cat in the Hat with my felt tipped marker—just to make sure I knew what he was talking about.  I still have that drawing today, but I didn’t learn to make a true Cat in the Hat till about 2003 when my son Justin invented one using new technique to do the red and white striped hat.  I wish I could go back and make it for Mr. Geisel.  He would have loved it! 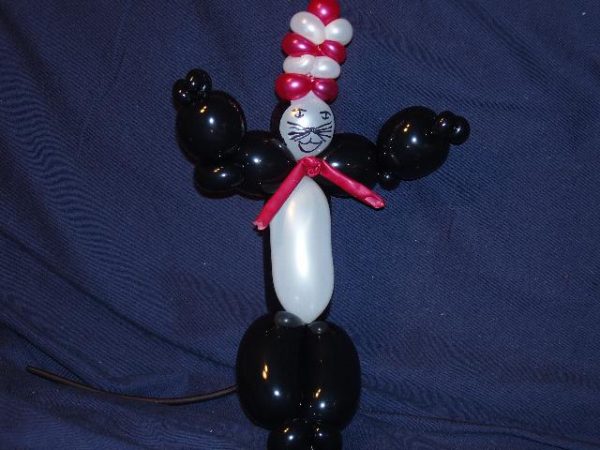 Designed with my son Justin’s help in around 2003

One day I got a call from the marketing director for the San Diego area Kaiser Permanente Medical Centers.  She was looking for someone to do a Talking Head Table character for her kick-off promotion for their new “THRIVE” advertising campaign.  I had seen a friend of mine do a talking head kind of thing at a previous promotion, so I felt like I could probably do it.  After I did some research on the web as to how it looked, and what to charge, I put together a proposal for my client, and she approved it.

The concept is this: a performer positions their body where they are sitting under a table, with only their head poking out of the top of the table.  Then, the actor is somehow made to look like a normal table centerpiece decoration.  Next, real food is placed on the table for the party guests to come up and take away.  Finally, when the guest least expects it, the centerpiece starts talking to them and they are immediately startled and tickled!  It’s a hilarious process, and the great thing is that everyone who knows the secret gets to watch all of the new guests get surprised in the same way (over and over again).

Dune Johnson aka Looney Dooney is the foremost family-fun expert, and has devoted his life to bring joy, laughter, and togetherness to every event he does.  For more helpful tips to creating the most amazing birthday parties, etc. visit his blog, or read his latest book, “The Timing of Chicken Feathers.”

Click here to purchase The Timing of Chicken Feathers on Amazon.